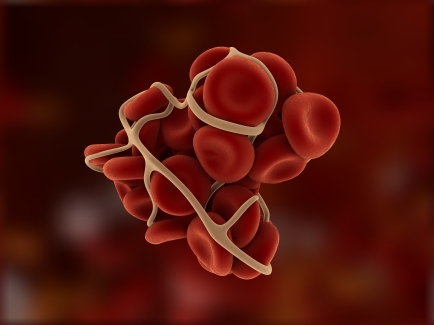 Deep vein thrombosis (DVT) is a condition in which a blood clot (thrombus) forms in one or more of the deep veins, usually in the legs. Blood clots can break free and travel with blood causing life-threatening condition like pulmonary embolism (PE) or a stroke due to paradoxical embolism in people with patent foramen ovale (PFO). DVT is not related to diving, but divers often travel and thus are exposed to risk of DVT. In case of acute DVT, divers must not dive.

DVT is an acute condition; approximately half of all cases occur without any noticeable symptoms.  Symptoms may include:

Most air travel-related venous thromboembolism (VTE) occurs within the first two weeks after the flight and resolves within eight weeks. Many cases of DVT are asymptomatic and resolve spontaneously. However, in about 25 percent of cases, untreated DVT of the calf can spread upwards into the veins of the thigh and pelvis. If DVT of the thigh and pelvis is left untreated, there is a risk of PE. DVT is often recurrent, and frequently, individuals who have experienced DVT endure long-term complications, such as postthrombotic syndrome or pulmonary hypertension after a PE.

Most cases of DVT occur in people with pre-existing DVT risks when sitting still for a long time, such as when traveling long-distance by airplane, car or train, in bedridden patients, and in office workers who sit at their desks long hours. Immobility slows down the blood flow in veins (venous stasis) and pressure exerted on the calf region by inadequate seats may injure vein walls. After sitting for 90 minutes the blood flow in the calf drops by half and this increases the chances of developing a blood clot twofold. For every hour spent sitting, the risk of a blood clot increases by 10 percent.

The risk of DVT

The incidence of DVT in the general population is 0.1 percent, but the risk is higher in subpopulations that have risk factors. Long-distance air travel may increase the risk of VTE by two- to fourfold. Although it is often called the “economy class disease,” travelers in business-class are not spared. Absolute risk for travelers on flights lasting more than four hours is between 1 in 4,650 and 1 in 6,000 flights, which is less than the risk present in the general population, but this is because people on long trips are usually healthier (very sick individuals tend to avoid long-distance travel). The incidence of DVT among travelers who are at low to intermediate pre-existing risk for VTE after travel of more than eight hours was found to be 0.3 percent for symptomatic cases and 0.5 percent when asymptomatic cases are considered. Pre-existing risks for DVT include:

Most individuals who developed travel-related VTE (75–99.5 percent) of those have more than one preexisting risk factor.

Short (height <1.6 m; 5 ft, 3 in) and very tall (height >1.9 m; 6 ft, 3 in) air passengers appear to be at an additional risk due to fixed seats, which cannot be adjusted to their height. In addition to immobility, shorter passengers may experience seat-edge pressure to their knee back and taller passengers are cramped due to insufficient leg room, which contributes to possible injury of deep veins, stasis of blood and activation of clotting mechanisms.

Pulmonary embolism is an emergency and patients need to get to the emergency room immediately. In diving situations, the diagnosis may be confused with dive-related injuries. In remote locations, an emergency medical evacuation may be needed.

Paradoxical embolism is called a condition in which a travelling blood clot passes to the arterial circulation instead of being lodged or filtered out in pulmonary circulation. This may occur in cases where there is a direct communication in the heart between right and left chambers (intracardiac shunt) enabling venous blood to pass to the arterial side. The most common form of intra-cardiac shunt is a PFO. Paradoxical embolism of circulation in the brain may cause stroke.

If DVT does not resolve and clots permanently block or damage some deep veins, return of blood from affected leg is slowed down (stasis). This results in:

The symptoms of postphlebitic syndrome may not occur until a few years after DVT. Treatment options include medications, such as aspirin or diuretics, as well as the use of compression stockings.

The treatment of DVT aims to:

Prevention of DVT on long flights

Risk of DVT for healthy people is small. People who have a predisposition to blood clots because of existing medical conditions are at an increased risk for developing DVT when flying. They should wear compression socks and consult their primary care providers regarding possible benefits from medications like aspirin. There is no evidence that healthy people without risks for DVT would benefit from compression stockings and aspirin. Everyone should avoid long periods of immobility; it is good practice to periodically get up and walk around. It also helps to exercise feet and calf while in seat to stay well hydrated.

For a referral to a physician near you who is familiar with diving medicine, contact the DAN Medical Information Line at +1-919-684-2948.